1. square up your screen 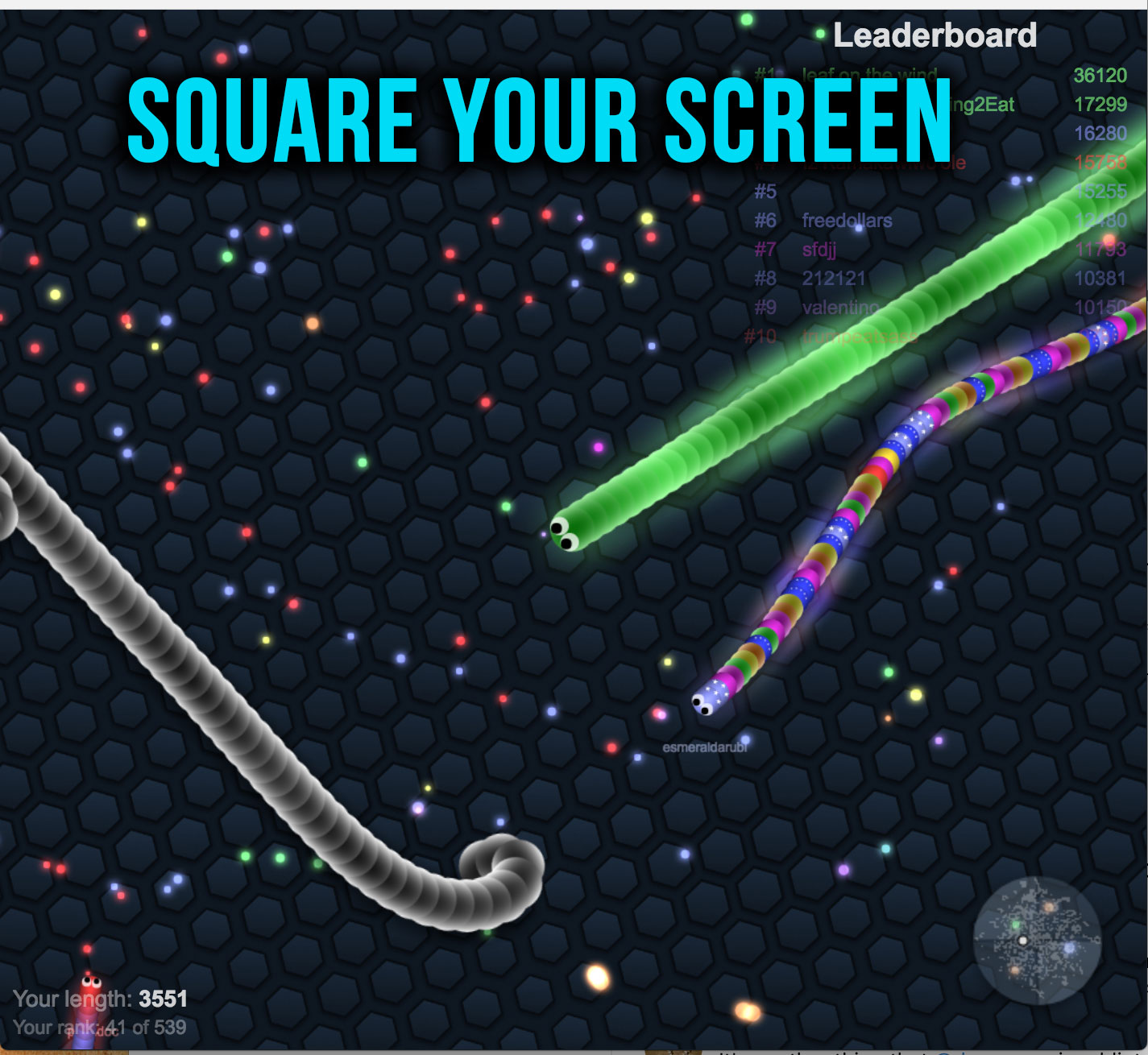 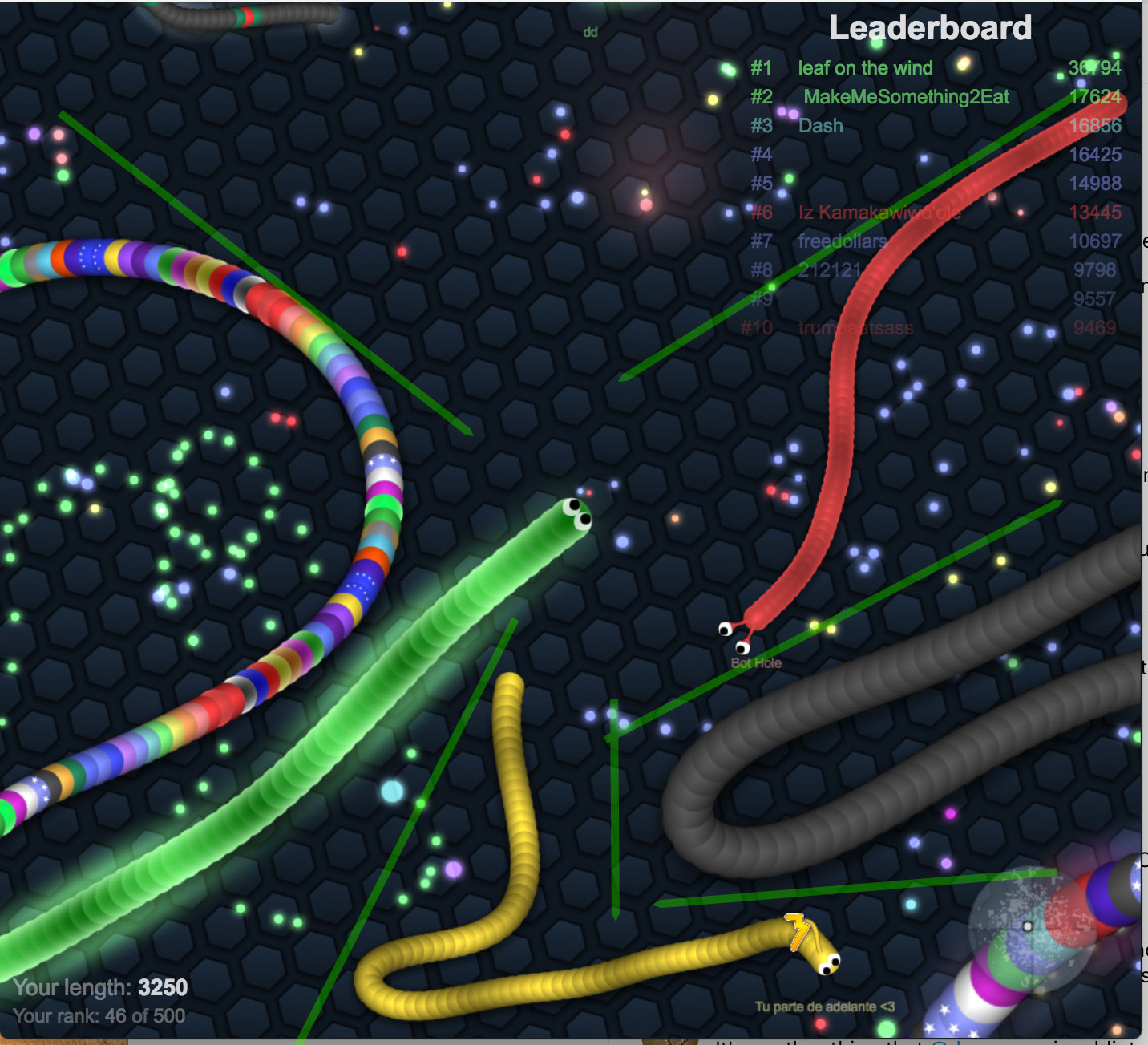 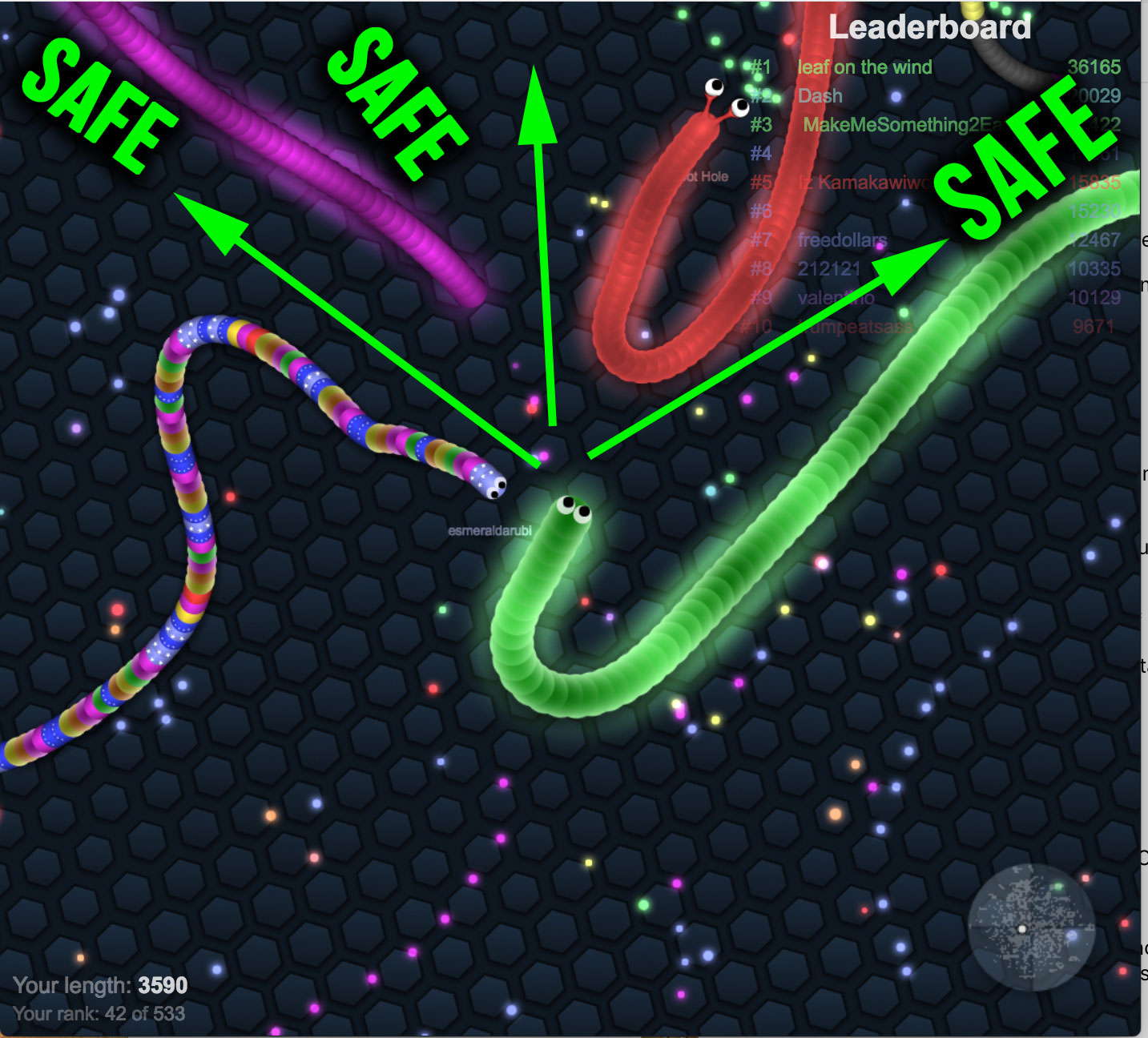 3. when you get to pro level, your straight lines will become shorter and shorter until you will appear to be moving like everyone else again, except that when it's time for you to bust out a straight line in a tangle of worms, you'll already know where the straight line exit is.

4. Practice making tight turns. You will have to go fast, then slow at the start of the turn, then fast to speed out of the turn.

As you shift to pro level, you will drastically reduce the importance of Speed inversely proportional to the supreme placement of importance on Position. In other words, where you begin is infinitely more important than how fast you can move. Even our Blockbuster Slither movie proves that you can get to the leaderboard without ever pressing the Boost button.

5. only go where there's space for your worm to fit. 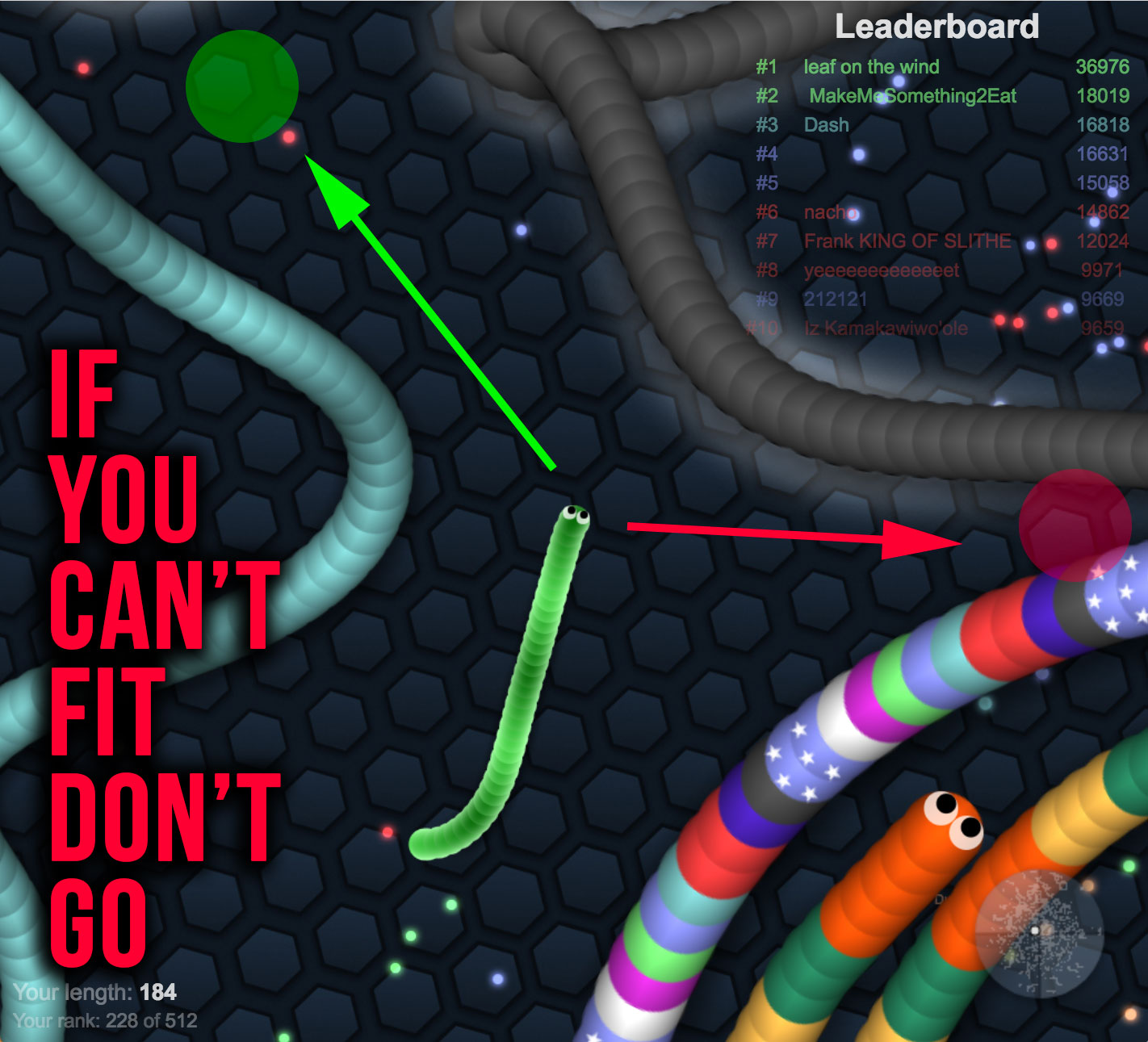 6. take up space. if you crowd the worms, they will crash into each other accomplishing half the work for you.

7. change your angle so that your worm's head is ahead of other worms. 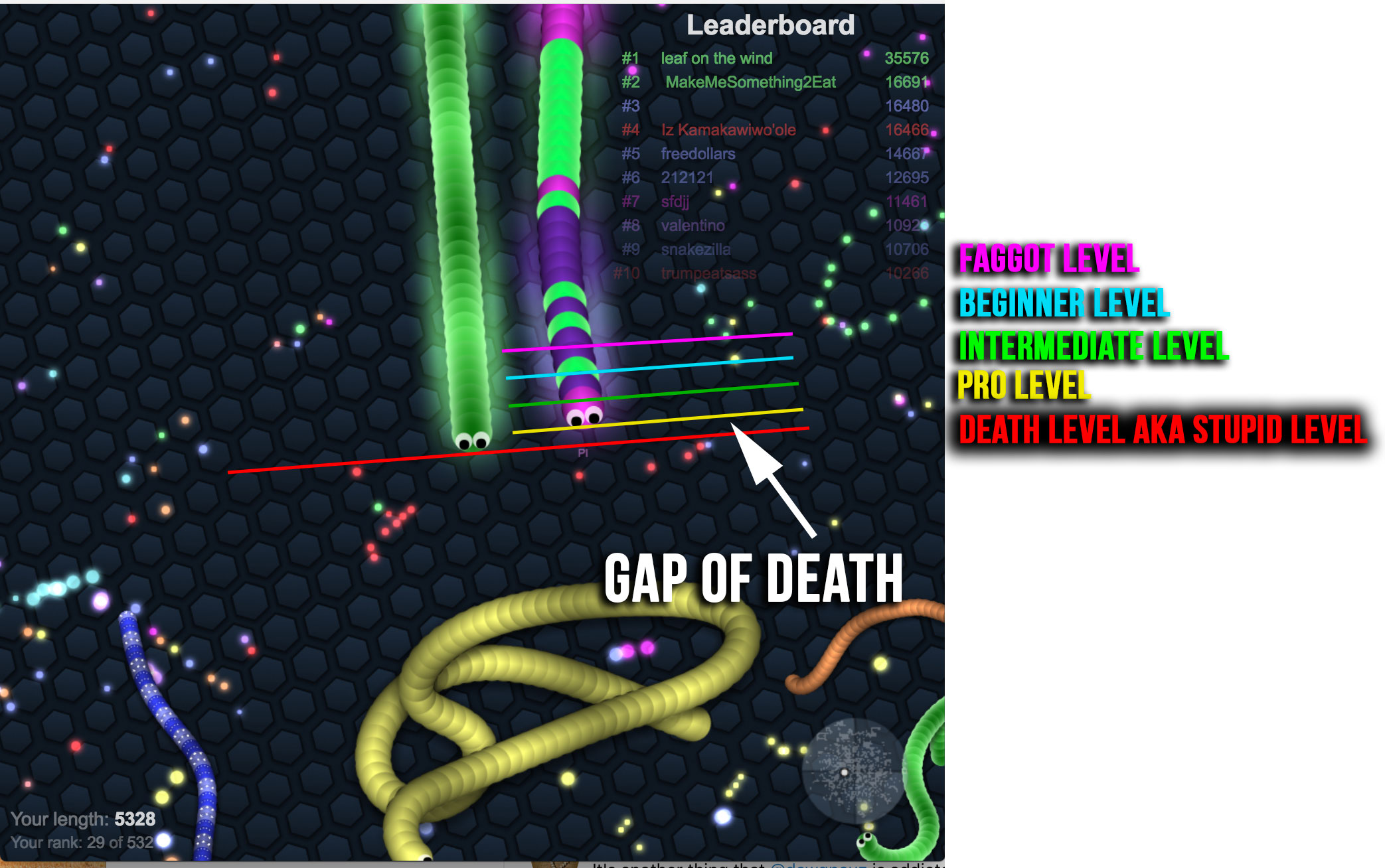 (spoiler alert: when you hit super pro mega level, the levels in the picture above will reverse.)

you can safely move between 2 worms trying to box you in if you remain ahead of their heads. 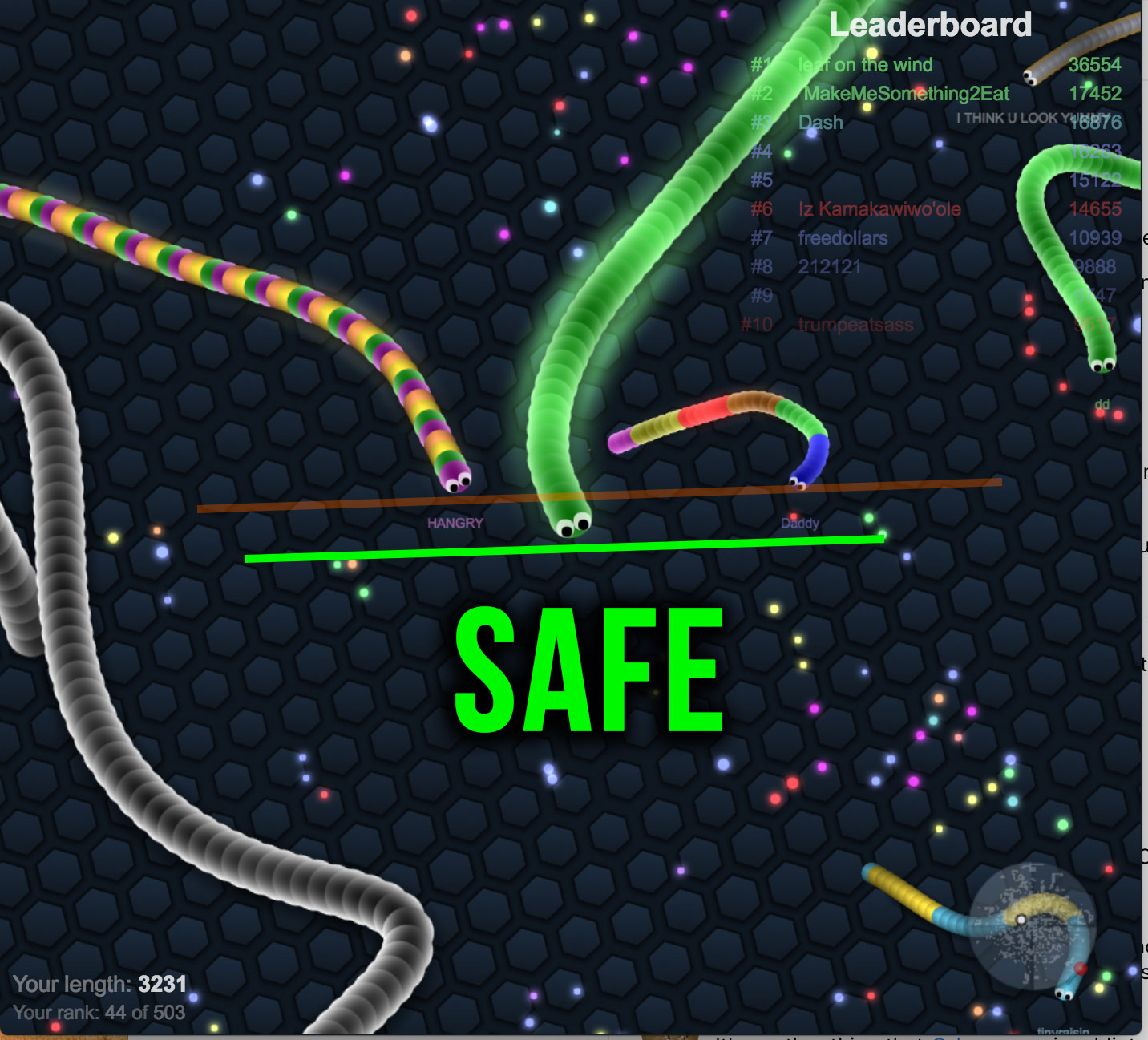 8. Dots don't move. Focus on the players, NOT THE DOTS. When eating dots, watch for players coming in and follow the straight line rule.

9. Play in the center of the arena. The outer edge is for no-talent faggot wetback players who are going to be deported for their low skill efforts.

10. Every variable counts. Every worm has its number. Every number is a clue on the sudoku board to tell you about the next number--the next snake--where it is in relation to the other worms. Where the other worms are pushing him. Where he wants to go. Where he's trying to go. And where he HAS to go.

All snakes speak--they let you know what their intentions are through their behavior. They reveal their plans with every movement. When a snake dies, it should never be an accident. You should know where his grave is before he does. You should have already calculated his demise. You should not be struggling to race ahead of him. You should wait until the moment is right to spring the pre-planned, pre-sweetened trap, like a Venus Flytrap that understands its mechanism. That understands it's not a hunter. It simply waits for the hunter to trap himself like a spider that spins a web and the fly doesn't realize he's already caught.

If you don't know ahead of time how your opponent will die, then you're not qualified to even take his life.
Top
Post Reply
1 post • Page 1 of 1